Anderson finished the 1998-99 season with the Guelph Storm of the OHL, where he served as a backup to Chris Madden. In 21 games with the Storm, Anderson went 12-5-1 with a 3.10 GAA, helping the Storm reach the playoffs. In three playoff games for Guelph, Anderson went 0-2 with a 4.74 GAA. After the season, Anderson was drafted by the Calgary Flames in the third round, 77th overall, in the 1999 NHL Entry Draft.

In 2000-01, Anderson became the starter for the Storm, as he appeared in 59 games, earning a record of 30-19-9 with a 2.63 GAA along with a .918 save percentage to win the OHL Goaltender of the Year award.[1] In the playoffs, Anderson and the Storm struggled, as he went 0-4 with 4.25 GAA as Guelph was swept in the first round. Anderson then re-entered the NHL Entry Draft for 2001, as he failed to sign a contract with the Calgary Flames, who drafted him in 1999. The Chicago Blackhawks drafted Anderson in the third round, 73rd overall.

The Chicago Blackhawks assigned Anderson to the Norfolk Admirals of the AHL for the 2001-02, where he served as a backup to Michael Leighton. In 28 games with the Admirals, Anderson went 9-13-4 with a 2.86 GAA. He then played in a playoff game for the team, going 0-1 with a 2.86 GAA and .938 save percentage in 21 minutes of work.

Anderson spent the majority of the 2002-03 season with the Admirals, going 15-11-4 with a 1.94 GAA in 32 games with Norfolk. In the playoffs, he went 2-3 with a 2.61 GAA in five games. Anderson also made his NHL debut in 2002-03 with the Chicago Blackhawks. In his first NHL game on November 30, 2002, Anderson stopped all four shots he faced after replacing Jocelyn Thibault in the second period in a 4-1 loss to the Los Angeles Kings. Anderson then started his first NHL game the next night, on December 1, 2002 against the Mighty Ducks of Anaheim, where he made 23 saves in a 3-2 loss. Anderson finished the year 0-3-2 with the Blackhawks with a 4.00 GAA in six games with Chicago.

With the 2004-05 NHL lockout cancelling the season, Anderson spent the entire season with Norfolk, however, injuries limited Anderson to only 15 games, where he had a 9-4-1 record and a 1.83 GAA for the Admirals. In six playoff games, Anderson was 2-4 with a 2.36 GAA. 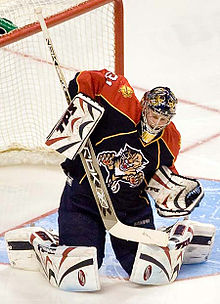 Anderson during his time with the Panthers.

In 2007-08, Anderson stayed with the Panthers for the entire season, as he was the backup goaltender to Tomas Vokoun. In 17 games, Anderson went 8-6-1 with a 2.25 GAA and a very impressive .935 save percentage. Anderson set an NHL record for the most saves in a shutout, as he stopped all 53 shots he faced in a 1-0 win over the New York Islanders on March 2, 2008. Anderson then had 40 saves in his next game, also a shutout victory, as Florida defeated the Boston Bruins 1-0 in overtime on March 4, 2008. That also set an NHL record for most saves in consecutive shutouts, with 93. However, Anderson’s record of 53 saves in a single shutout was broken when Mike Smith of the Phoenix Coyotes made a 54-save shutout against the Columbus Blue Jackets on April 4, 2012.

Anderson was the backup once again to Vokoun in 2008-09, however, he appeared in 31 games due to an injury Vokoun suffered during the season. Anderson went 15-7-5 with a 2.71 GAA, as Florida narrowly missed the playoffs. After the season, Anderson became a free agent, and on July 1, 2009, he signed a two-year contract with the Colorado Avalanche.[2]

Anderson joined the Colorado Avalanche for the 2009-10 season, and won the starting job from Peter Budaj in training camp. In his first season with the Avalanche, Anderson went 38-25-7 with a 2.64 GAA, .917 save percentage, and seven shutouts, helping the team make a surprising run into the playoffs. He won his first game with the Avalanche in his first start, a 5-2 Avalanche victory over the San Jose Sharks on October 1, 2009. In his next start, Anderson recorded his first shutout with the team, stopping all 35 shots in a 3-0 win over the Vancouver Canucks on October 3, 2009. Anderson became the fourth goaltender in team history to win 30 or more games, joining Patrick Roy, David Aebischer and Peter Budaj. He set the team record for consecutive starts to begin the season, as he started the first 15 games. He led the NHL in saves with 2047, and shots against with 2233. 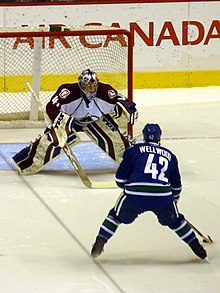 Kyle Wellwood shooting on Anderson during a shootout in April 2010.

Anderson made his NHL playoff debut on April 14, 2010, as he made 25 saves in a 2-1 victory over the San Jose Sharks. Four nights later, Anderson recorded his first ever post-season shutout, as he stopped all 51 shots fired at him, as Colorado won the game 1-0 in overtime. The Sharks would eventually defeat the Avalanche in six games, as Anderson had a 2-4 with a 2.62 GAA and a .933 save percentage.

He struggled to begin the 2010-11 season with the Avalanche, and eventually lost his starting job to Peter Budaj. With Colorado quickly falling out of the playoff race, and Anderson struggling with a 13-15-3 record and a 3.28 GAA, the club traded him to the Ottawa Senators for Brian Elliott on February 18, 2011.

During the 2011–12 season, Anderson was among the league leaders for wins with 29 in 56 games before being sidelined in mid-February by a right hand injury sustained in a cooking accident.[5] The Senators then acquired minor league goalie Ben Bishop from the St. Louis Blues near the trade deadline.[6] Later in the season, Anderson’s Senators faced the Eastern Conference‘s top seeded New York Rangers and took the series to seven games before losing 2–1 in the final game.[7]

The lockout-shortened 2012–13 season started off very well for Anderson. In his first ten games of the season, he posted a record of 6–2–2 with a 1.49 GAA and .950 save percentage, earning consideration as an early Vezina Trophy favorite.[8] He was named the NHL’s first star for the month of January (2013).[9] Anderson, however, suffered a sprained right ankle in a game against the New York Rangers on February 21, 2013, when he was knocked down by Rangers forward Chris Kreider.[10]

On August 25, 2014, the Senators announced they had signed Anderson to a three-year, $12.6 million contract extension, starting in the 2015–16 season.[11] During the 2015 playoffs, Craig Anderson took over for Andrew Hammond in the first round after Hammond lost the first 2 games against the Canadiens. They would go on and lose to Canadiens in six games with Anderson posting a 2-2 record.

Anderson would miss parts of the 2016–17 season as he would take personal leave to support his wife in her battle with throat cancer.[12] The Senators would acquire Mike Condon from the Pittsburgh Penguins in exchange for a fifth-round draft pick in the 2017 draft due to both Anderson’s personal leave and backup goalie Andrew Hammond being injured at the beginning of the season.[13] On 11 March 2017 Anderson set a team record for most wins by a goaltender when he won his 147th game, breaking the previous record set by Patrick Lalime.[14]

Anderson played for the United States at the 2006 IIHF World Championship held in Riga, Latvia. In five games, Anderson went 3–2–0 with a 2.36 GAA; the U.S., however, finished in seventh place. Anderson once again represented the Americans at the 2008 IIHF World Championship held in Quebec City, Quebec, and Halifax, Nova Scotia, where he went 0–0–0 with a 5.63 GAA in two appearances as the U.S. finished in sixth place.[15]

Anderson has instructed many goalie camps since being drafted in 2001. He currently instructs at Craig Anderson’s Goalie School in Chicago during summers.[16] On October 29, 2016, Craig Anderson’s wife Nicholle was diagnosed with a form of throat cancer. In May 2017, Nicholle revealed that she was cancer free. The family’s hardships throughout the year lead to Craig being announced as a Bill Masterton Memorial Trophy nominee for perseverance and dedication to hockey. He did as well win the award, Despite missing time to care for his ailing wife and their children, Anderson still played a key role in Ottawa’s run to the 2017 Conference Finals.